It's Wednesday again and I was able to fit a couple of bricks onto the tapestry wall I am weaving.

Today I wanted to try out that 'turn on the valley or mountain' concept. I have heard about it but never really explored it. I generally turn whenever to achieve whatever look I want to get...without any real thought about it. Koehler emphasized that you should be consistent in which you chose in each area for the best looking result.

Koehler explained that if you are weaving an area where one color is increasing and the other decreasing, you can achieve two different looks at the point the two colors change. The look depends upon whether you turn the brown yarn around the warp that is up or around the warp that is down. So I wove a brick and always turned the brown warp on the lower warp to see what would happen. 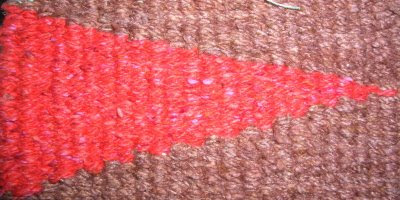 Hmmm...I think I will need to really focus on this next time I am weaving a section where the concept applies. Not the easiest thing to remember.

I wonder how the line would look if I alternated each time...

Posted by Notes from Nicki at 6:55 PM No comments:

A Conversation in Fiber

For our Guild challenge this year, we have been challenged to have a conversation in fiber with either Georgia O'Keeffe or Piet Mondrian utilizing at least one of the conference colors for ColorConnects, a fiber conference spearheaded by the Association of Southern California Handweavers. It takes place in Riverside California in March 2009 and focuses on color.

So my challenge is fairly simple in concept. Have a conversation in fiber with O'Keeffe or Mondrian utilizing at least one color from a selection of five That's pretty much it -no further restrictions or limitations. Fiber is basically fiber and a conversation is basically that.

I have selected Mondrian. And have decided to create a hat encompassing a bit of a bird theme. I cannot think of anything less Mondrian than a bird. So now I have a challenge.

Clearly Mondrian's focus on proportion is critical to his pieces. The two concepts backing his most momentous pieces are contrast of proportion and contrast of hue. James Koehler discussed both of these in the color seminar I took at Convergence.

Before I do much study into either concept or the theories underlying Mondrian's pieces, I took a try at creating a Mondrian style design myself.

It looks a bit like Mondrian but just not right. Need to work on the mix of vertical and horizontal shapes as well as the position and quantity of the colors. I do like the three colors I have initially selected to use with the white and black. I need however to be open to using the other two possible colors also. When weaving with taquete the colors tend to blend a bit with the warp color as well as whatever is adjacent.

This will be the band of the hat. It needs to be 26 inches long and will be woven in sewing thread. When considering the proportions I need to remember that the viewer will not see the entire 26 inches at once.

What? Is that knitting I see? 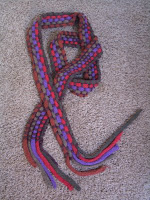 Yes, this is a knitted scarf I finished upon returning from Tampa. It is basically knitted I-cords which were woven into a scarf. Yes, indeed I do remember how to knit and yes, I did knit in public. I knitted it while on the various airplanes or in various airports over the last several weeks.

I must admit I forgot how to cast off so I used safety pins. When I got to the last leg of my trip I had nothing else to do but play around dropping stitches in different ways until I finally remembered how to cast off. Happily, I had all the I-cords completely finished by the time I landed at LAX.

The idea for this scarf came from Knitting New Scarves, 27 distinctly modern designs by Lynne Barr. I like the book since each scarf is really different not due to color nor yarn but due to its shape or structure.

The warp is simply five I-cords knitted in some silk I found in my stash. The weft is also a knitted silk I-cord but knitted with smaller needles. I originally knitted the weft in an off white silk with number 3 needles. When I wove up the weft and warp, it had to be the ugliest thing I have seen in quite awhile. Even my DH thought it was 'not good'.

My roommate at Convergence said she just bought a little gadget at Joann's which made I-cords by turning a little crank. Sounded intriguing so I bought one. I then proceeded to make yards and yards of I-cord from some thinner purple silk I had dyed for a previous project. Once woven with the original warp - I took the picture above.

Far better than the first attempt and better than the one illustrated in the book. I'd really like something a bit thinner so I could wear it more in California. I have a lot of perle cotton in my stash. I may try that next if [when?] the weaving of my two tapestries gets too frustrating.
Posted by Notes from Nicki at 11:09 AM 1 comment: 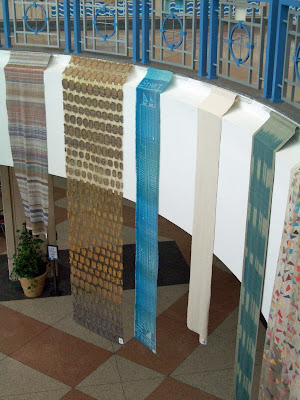 Here is a photo of the Ebb Tide Exhibit at Convergence in Tampa. The blue yardage with the two sailboats and START at the top is mine.

All the pieces were hung down from a rotunda. There were enough pieces to go all the way around. You could view from above or below. From below they had a list of the pieces, names and artists. All the pieces look spectacular.

On the top level they had the samples along with the descriptions. It was a bit hard to view from the top level since the samples and descriptions were right above where the yardage was hanging. I would touch the sample then kind of hang over the railing to get a good view of the yardage. I would then go around the rotunda to get a better view of a specific piece but would be distracted by another sample to touch.

But hey, it made everyone stay longer and enjoy the pieces more!
Posted by Notes from Nicki at 11:01 AM 2 comments: