ps - - I just updated the blog with a photo...my computer completely died several days ago ...again...this time data was saved but I had to reinstall all drivers and software...Vista sure sucks! Anyway this is a photo of chapter 10 I believe - where our hero begins to figure out who the murderer really is... I see you missed photos of the Ox Roast and Blood Drive and a few other chapters...oh well...you can 'read' it all later.

Well it was a productive morning...four hours of continuing education for my CFP as well as weaving to the end of my warp. I even had enough time to untie the shoelaces at the beginning of the piece; my least favorite task of all.

This is the loom with my woven mystery story on it. I never knew how much warp was on the loom since I had put it on years ago and forgot about it. But it turned out I had enough warp to weave up to the middle of chapter 11...only a chapter and a half plus an epilogue to go. But those pieces will have to be on a new warp along with a sample to send in with the entry form, a key to the characters and events plus some contrasting border material. I will tie it on...should be quite easy. Tie a new red warp to the old red, a new violet to the old, a new gold to the new, etc.

So before wet finishing I have a bit over 16 feet of yardage about 22 inches wide. I need to check all the edges of the correction tape that I wove in to make sure it won't come out in the wash. I am going to trim the ends of the bamboo weft which hang out the sides so they won't catch on anything. I quickly discovered that weaving in the bamboo ends messed up the pattern and distorted the stripes so I stopping doing that. I just tied off an old color at the edge and tied on a new color. There are lots of color changes and hence lots of loose ends. I will probably serge the edges so everything is nice and neat in the finished jacket....

I'll take a photo post wet finishing. It looks good now however, mostly greens and reds. I would have expected mostly greens and purples...given that the green is the hero and the purple is the villian but the reds look really good.

Ah, they all looks good. Should be a nice piece.
Posted by Notes from Nicki at 1:44 PM No comments:

Chapter 7 was so much more exciting than chapter 6. Have you noticed in most mystery stories about half way through there is some flashback or a long section describing the inner workings of the hero - what haunts her, what motivates her etc. Well, that part, which in my tale is chapter 6, is fairly boring to weave. Plus - I had two broken warp ends...

On a more positive note, here is chapter 7 where at their weekly mahjong game, our hero and her friends work through all the events of the past few weeks. By the third round they are surprised to realize who must be the murderer. Although it is hard to believe, the facts point to only one person -Irma's husband, Max.

As is all mysteries, there is a pivotal moment when the hero realizes she has been heading down the wrong track. This is my hero's moment. The phone rings...

And so begins Act III.
Posted by Notes from Nicki at 12:44 PM No comments:

Here is a photo of chapter 5 of my mystery story. Tomorrow I work on the word version of the story.

In this chapter the hero is curious about a clue which consists of a list of coded words and numbers. The hero and her helpers work to decipher the list and struggle to understand its significance. As everyone begins to realize the list's implications a growing feeling of fear and dread envelopes the group.

I think chapter 5 will be easier to write than chapter 4. It took awhile to even start writing chapter 4 although once I started it was quite fun. I had to create an entire society of weavers and all the interconnections between each other and the other characters I already created for the story. Plus, I didn't want any of them to be exactly like any of the actual weavers I know. And I seem to know a lot of weavers, being in three guilds and all.

It was kinda fun, but time consuming, to decide on age,names, personality, appearance, unique characteristics, how they talked, what type of weaving they focused on and what they brought to show and tell. The Westside Weavers Society ended up being fairly small but exclusive group; a dozen women and one man; all accomplished weavers. They did vote in one new member at the last meeting.

Writing is such a hoot!
Posted by Notes from Nicki at 5:09 PM No comments: 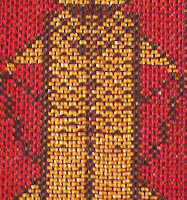 I was inspired over the last couple of days. I designed seven beetles which are now ready for weaving. My goal is to get a dozen done in a fairly short time span.

Actually six are ready for weaving since I already finished one this afternoon. I took a close up photo of the back. It incorporates some of the patterns I displayed in my sampler. I am quite happy with the results. The photo is not the greatest...

What I now need to come up with is a notational system which I can add to my excel spreadsheet to remind me what pattern to put where.
Posted by Notes from Nicki at 4:09 PM No comments: