My weaving guild had a dye day last Friday and Saturday and we dyed silk scarves with Procion dye.   There were big mason jars filled with prepared dyes in lemon yellow, golden yellow, two blues, two reds and a #44 black.    We had ordered a significant number of silk scarves and were free to do whatever with them in whatever colors we wanted to create.  There were tons of jars in all sorts of sizes, brushes, rollers etc.  We had a steamer set up on a camp stove and a crock pot for steaming.

To the right is my first piece.  I must admit the photo makes the piece look fairly ugly on my computer screen.  Yet in person, it is my favorite scarf.  It is pale and delicate in a beautiful yellow.  It is definitely a keeper.

I pinned the habotai silk scarf which was soaked in vinegar to two 36" x 12" stretcher frame so I would have more control over where the dye went.  Using lemon yellow and black I made a variety of gradations and painted stripes in the resulting colors.  I was simply mesmerized by the gradations.  Since it was warm this scarf was quickly dry so I did not have a lot of blending of the different gradations of color.  I also experimented in a couple of places with putting kosher salt on wet spots to add a different pattern to the piece.

I next switched from lemon yellow to golden yellow and watched the avocado greens emerge in the gradations with black.   The scarf with circles used a flour resist which worked quite well.  I squeezed out the flour and water mixture out from a ketchup bottle and dyed the scarf with various gradations of golden yellow and black once the flour mixture was dry.  In two other pieces I painted a beetle on the scarf in black.  On the first one the scarf was wet and the dye spread while on the second one I let the scarf dry and painted the beetle on with a thin brush.  The last one  - the one on the left had a background from my leftover dye that had soaked into the table cloth on my table ... and then I started to use some colors which were just lying around whispering to me to use them up.

There were perhaps a dozen of us dyeing in a variety of colors so there were lots of jars laying around with 'unkown' colors.  I picked up a few and created the scarf below.

On Saturday we were cleaning up and threw all the greens into one jar.  I checked the color and had to make these two scarves in the remaining absolutely unreproducible fabulous green. 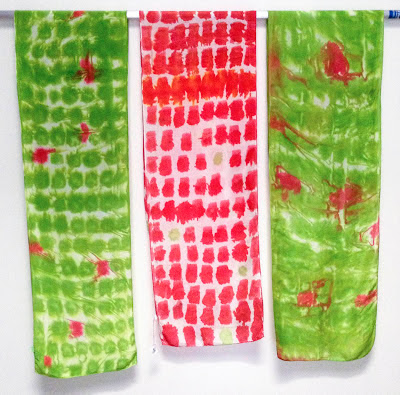 Quite a fun time....and I see more gradations of yellow in my future.
Posted by Notes from Nicki at 3:42 PM 2 comments:

One of my weaving groups is going a collaborative project which began with the development of a communal color wheel out of scraps of paper during one of our monthly meetings. 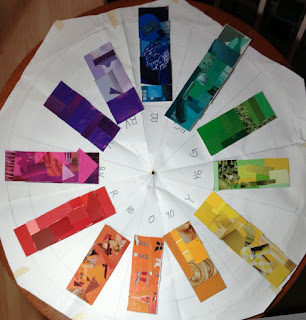 We all brought small pieces of paper in each of the 12 colors of the color wheel and sorted them out into the 12 piles of color.  We had over 15 people there so there were a lot of scraps in a lot of different hues, shades, values and tints.

Next we broke into small groups re-arranged the colors back and forth between piles until everyone was reasonably happy that the papers were in the correct piles by hue.

Next we made quick small collages in each color. Everyone could select what ever color segment they wanted; take whatever scraps from that segment that they wanted to use and glue them however they liked.  Some colors were more popular than others and ended up having far more collages than others.

Here are the collages in each of the twelve colors of our color wheel and the resulting color wheel accomplished in less than ninety minutes.