Starting the Big One

I am almost finished with my five inch maze cube...just a bit of sewing left...so my sixteen harness loom is ready to for its next project.

Next up: my piece for the exhibit Ebb Tide at Convergence-Tampa 2008. It's a juried international yardage exhibit. I exhibited last year with my beetle piece which received an honorable mention. If I recall, minimum size is nine feet by eighteen inches.

I need to get the piece woven and finished plus an eight by eight inch sample done by January 1 so I can ensure I can get good pictures for the jurors. Since my yardage will be over 10 feet long and woven with sewing thread and three shuttles I need to get going!

The best way I know of to really get going on a giant project is to clean and re-organize the studio. So that is what I did today. I tossed a bunch of stuff. Organized some stuff. Moved some stuff. Touched and decided to deal with some stuff and not deal with other stuff. Then the studio was dusted and cleaned. It has now been re-arranged so I have a huge table which only has the stuff [loom, thread, pattern, notes, shuttles, scissors...] for the new piece and lots of empty space! I am ready. 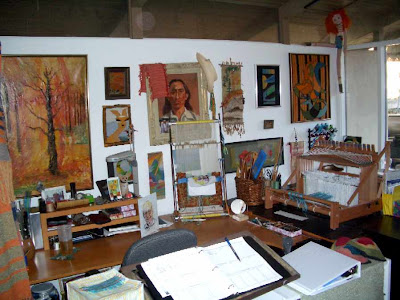 In the newly arranged studio there is also a new space for the borrowed baby Shannock loom which has the tapestry I am currently working on.

There is also a place for me to sit and write on my computer. The computer in my studio is not connected to the Internet. I only use it to write notes and thoughts about the pieces I am weaving and watch DVDs. It also contains the beginnings of my novel. I occasionally read the prologue and first chapter and marvel how good it is.

THEY say there is a novel in everyone just waiting to come out. Mine is having a tough time coming ...perhaps a laxative is in order.

THEY also say you need to have a special spot to actually sit there and write. I now have one so good bye to that excuse.

THEY also say you should have a designated time where you just sit there and work on it. Now there's a problem. My writing area is right next to my tapestry loom and in close viewing distance of my sixteen harness loom. 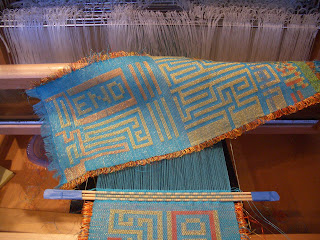 Here is what I have been laboring over for the last several weeks on my sixteen harness table loom. I started with the Tour de France. It seems like so long ago...

The piece laying over the top is my sampling. Turns out the sample is about 20 inches...the finished piece is about 30 inches...essentially six five inch squares.

I have a lot of wasted thread. It is by far much easier to simply take out the sewing thread and cut it off and start a fresh than weaving it out and then back in. I don't think I went more than three or four rows without making some sort of error or not liking the balance.

The piece is resting...I am resisting the temptation to look and touch it. It needs a bunch of finishing before I can pull it all together into its final form.