This is one of my tapestry pieces I just finished framing. It is called The Majors. 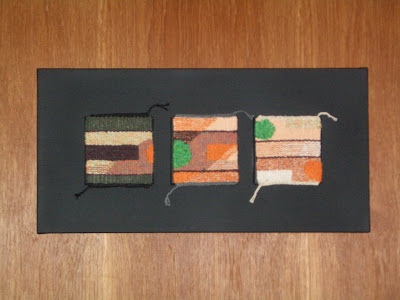 This is one of the pieces that is the result of my study of value last year. It illustrates the low, middle and high major value keys. If you recall, a major key uses the entire range of values. There is however, one set of values which predominates with the other two values as accents. For example, the low major has the entire range of values but the darkest [the lowest] third of the value scale predominates with some middle values and a very light value color for accent.
The yarn is either silk or a cotton silk blend and the pieces were woven on a small Shannock table tapestry loom. I used perle cotton as the warp since it had the colors which I needed. It is often said that perle cotton should not be used as warp...I did it anyway. Since I don't make the warp super tight nor do I leave the warp on the loom for a very long there were no issues. I did have a warp or two break on the black warp which stayed on for about eight weeks while I worked on something else before getting back to it. A second black warp worked fine.
I had originally left the framing as a project for my DH to use all those cool tools in the garage to create beautifully cut and sanded blocks. I wanted each piece to rise out of the black background by an inch or two. Fortunately for DH, Dick Blick saved him by having a huge sale on pre-made canvas. Since I had to buy so many little canvases, I qualified for the 70% off prices. With a little spray paint, glue, a staple gun and some velcro - voila!

Posted by Notes from Nicki at 5:42 AM No comments:

Just not my thing... 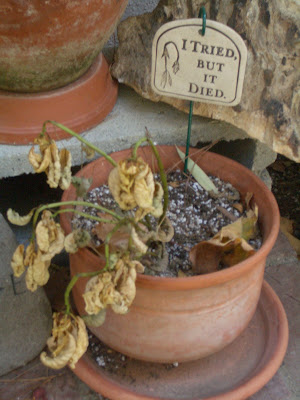 Posted by Notes from Nicki at 10:25 AM No comments:

I've been busy as a bee...and I just got my camera out to document the progress - so if I can just find some time to blog you could see what I have been up to!

I finished up my Value Study where I was weaving small four by four inch tapestries in the various value keys. I am now working on the finishing and framing.


Here is one of the last four by fours I wove...is the low minor key, composed of only dark values. I finished with the same value key that I started with. Go here to read about the first attempt. 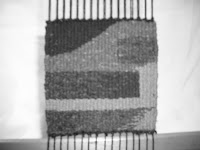 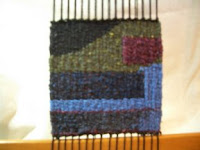 Posted by Notes from Nicki at 6:20 AM No comments: