Here are three tapestries that I have recently completed. I am exploring different setts with different number of weft strands. No conclusion yet.

One more to go...I think I am visualizing a hippo... 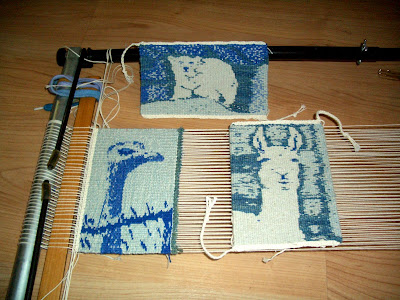 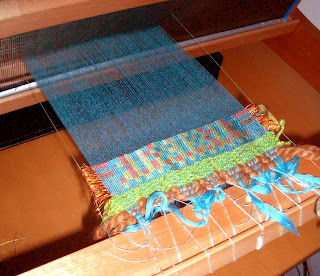 Well here is another project I have been working on for the last month or so. I can't yet say exactly what it is yet...but it is another take on a maze. The cartoon took many weeks to figure out. The warping of the loom was a nightmare. I think the weaving should be quite easy.

I had nothing to weave while watching the Tour. So I decided to warp my 16H loom for a piece that I want to enter into Small Expressions next year. There is no table in the den big enough for the loom so I had to move a new one in. The table was round and of a slightly different height and size than I am used to. Plus, it was a bit awkward getting the threads through the reed and the heddles. I have never made as many mistakes as I did on this piece. There were only 310 ends which needed to be sleyed and warped. At 48 epi that only a bit over 6 inches wide. Now I admit I was using serger thread which is thin...but on the positive side it was turquoise blue...a lovely color and a nice contrast with the white plastic heddles. I think I must have touched each end at least twice and some I fixed several times. After three days, I moved the loom back to its assigned work area and finished up the warping in a day or so.

The photo shows the results of my color testing for the weft. I must admit, it looks better on the loom than on that photo...I may go and test a couple more colors having seen that photo....
Posted by Notes from Nicki at 7:56 PM 1 comment: