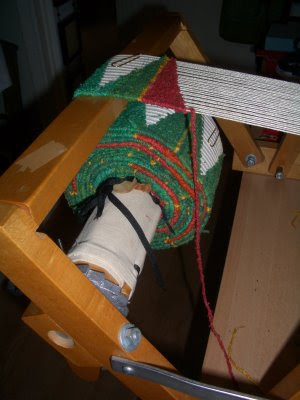 A couple of you asked about progress on my tapestry spiral.

Here's a photo with about 5 yards completed - not quite half done. My goal is to weave two sections a day. It only takes about 20 minutes to do that and doesn't require much thought.

I wrote about yarn selection back in August. Here you can see the red sections are starting to become more prevalent and soon the green will recede more.

As you can see my front beam is almost full so I will have to remove the woven material from the front beam and have it hang down the front while I weave the rest. This was not unexpected and I have a plan on how I will make it work.

The real interesting question is whether there is enough warp to complete the entire design...
Posted by Notes from Nicki at 10:04 AM 1 comment:

After several hours, we got nowhere. It turned out we kept going over the same spot over and over again. The wind was so strong that no matter how wide we tacked the wind would take us back to where we started. A bit of ground hog day on the water. In order to get to Anegada before night we changed our approach - turned on the autopilot along with the engine and motor sailed all the way.

Anegada - a fabulous spot...away from everywhere...if you ever have the chance to stop by - do it. 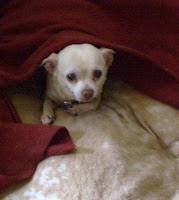 Anyway, yesterday I got to the half way point on my Mondrian inspired hat band. This morning I wove an inch or two and then decided I had to rip. I just couldn't stand a small imperfection about four inches down. It looked like I snagged one or two warp ends...remember that the warp is thread so it was a tiny, a very tiny imperfection. But boy with every pass of my shuttle the bigger and more noticeable it became.

The thing about imperfections in weaving is that once I notice them they continue to nag at me as I weave. The further I get from the imperfection the more it bothers me and the worse it looks. I know deep down I should just stop and rip & fix when I first notice it...but I often end up thinking - oh it won't show or I can fix it later. This time I had to rip out about 80 passes. Then I had the toughest time fixing it. I re-wove the same row about five times before I was happy. I figured if I was fixing it - I should at least be completely satisfied. I finally said...enough. Time to do something different - time to weave some bricks. Hopefully, tomorrow morning I should be able to catch up and be half way done on the hatband... again. 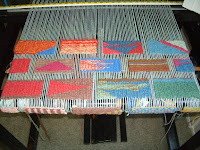 Today is Wednesday...on Wednesdays I am supposed to work on my bricks. I have been a bit tardy on this project missing several Wednesdays. It's not due until next year...so I figure I have time.

I have now five rows of bricks with many more to come. The colors are starting to brighten as I move out of the browns and into the reds. Each brick has a different design. I get to weave whatever I feel like weaving - no structure. Only rule is that 'no brick is alike'. I finally broke down and created a color selection plan so I don't have to struggle with color selection.

I now find weaving my brick wall to be quite relaxing and fun. Similar to playing with the dogs.
Posted by Notes from Nicki at 4:46 PM No comments: 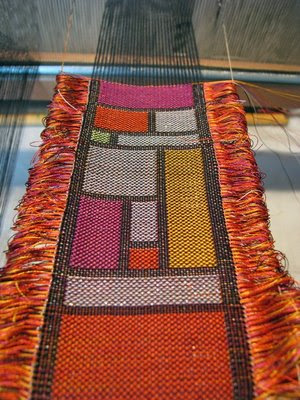 One quarter of the hat band done...

Posted by Notes from Nicki at 11:35 AM No comments:

I have made substantial progress on my Guild challenge. As you may recall, the basic challenge was to have a conversation in fiber with either Mondrian or O'Keeffe. I had selected Mondrian and wanted a hat with a bird theme* ...

Well, it's all planned out and in the execution stage. My goal is to complete it by the end of September.

I originally had selected three saturated colors; a vibrant red-orange, a vibrant yellow-orange and a teal. I have since tossed the teal and replaced it with a magenta or fuchsia color - a red purple. While walking the dogs I had seen a grouping of flowers in those three analogous colors and they looked excellent together. So now they will become part of my headband.


Here's a photo of my final colors in Sulky sewing thread. 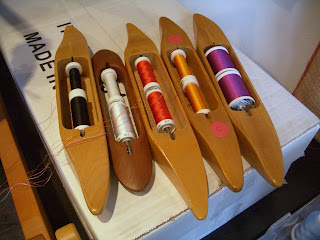 I designed an initial cartoon as a starting point by simply putting boxes and colors where they seemed 'right' in a self made Mondrian design. I wrote about that here. Later I studied the design and decided I needed to have a better balance of the colors - no one color should stand out and I wanted it to be a bit easier to weave.

To make it easier to weave I decided to have squares the width of the band, one in each color located equally around the band. I would then put the smaller rectangles and squares along with the greater complexity between the squares.

Here is the final design in close to the size it will be once woven. The colors aren't true in the cartoon nor in the photo. It was created in excel. When I am ready to weave I will print it out larger so I can actually read each row and column since they indicate which shafts should be raised for each shuttle of colored thread. [You may notice the proportions don't look quite right...yes...I was a bit lazy. Those squares in the cartoon would have been a bit more square if I had worked on getting the rows and columns in excel to be the same size...] 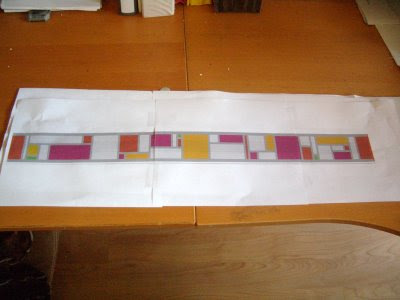 Anyway, it took a while to get to this point since I took a couple of iterations to get a good balance between the three analogous colors. Mondrian tended to use a lot of white with a few other colors always separated by black. The other colors were always proportionally balanced. I figured if I was trying to converse with Mondrian, this part of the conversation should be balanced.

My first step was to figure out how much of each color I had in the design. Since I did it in excel, it was pretty easy to get. I discovered the red/orange occupied the greatest proportion of the design with the red/purple and yellow/orange having smaller and similar proportions. Whether that is a good balance depends on how visually intense each of the colors are. If they are equally intense then they should be in equal proportions and I would need to alter my design.

I used concept of balance in the Munsell Color Theory Handbook that I have been studying. It says to achieve balance you need a good balance of both chroma and value. For example, if you have two colors - one with a stronger chroma and higher value and the other with a weaker chroma and lower value, you would need to use less of the first and more of the second proportionally to achieve balance.

To determine a numerical value for the chroma and value of my three colors, I matched them to the color chips in my Color Handbook. Multiplying chroma by the value gives a representation of the overall impact of the color. I converted those to proportions and discovered that the red-purple will stand out much less than the other two colors and hence would need to occupy a greater proportion of the final piece in order for there to be a good balance.

I was again lucky. I did not have to re-do my design. All I had to do was switch the red-purple with the red/orange and the resulting proportions were in the ballpark for a good balance. A quick switch in excel, the design was done and I was ready to weave.

Now on to sampling... Here is a photo of my sample where I needed to determine how many colors and strands of thread I wanted to weave with in this piece. 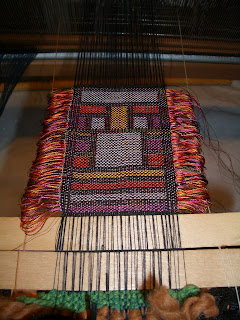 I was again lucky. Using two strands of each of the five colors will yield a balanced weave and provide good coverage for the head band. Therefore, I only have to weave one pass for each row in my cartoon. This makes things so much easier.

This afternoon, I actually started weaving the headband and it looks quite astonishing. I love it. Once I have a few more inches done I will take a photo with my better camera to give you a sneak peak at the work in progress.

* You also may be wondering how the bird fits into this creation...trust me...it does...it too is quite astonishing...more later.

I have been weaving up a storm recently with little time to blog. It has been an extremely satisfying month.

I have woven three tapestries in a series called Deja Vu and come up with two more ideas for pieces in the series. As soon as they are 'framed' I will show some photos.

I have made great progress on my mosaic for our Guild challenge. I still have not yet started the weaving for the hat band...but I reserved September for that part...oh my...it is already September...better start working on that too!

At the next meeting of the Southern California Handweavers Guild I am giving a quick demonstration of the pulled tapestry technique. I decided to show how to make a frame for a picture. It should be an easy piece to pull in front of everyone.

Long ago I bought five small canvases at Blicks...each canvas is 2 inches square. They have been sitting by my desk waiting for inspiration. Well inspiration hit and I am now feverishly making tapestry frames for each one and will then paint something which will go with the frame. The reverse of most people's method.

Here is my first attempt - - 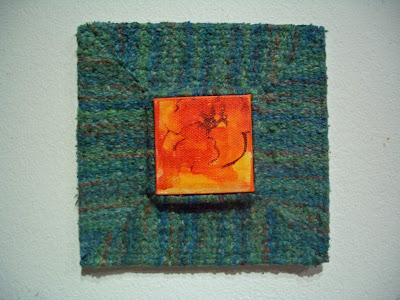 The painting isn't done yet. That is simply magic marker to give me an idea what the a painting would look like in the frame. I will do the final one in acrylics. I think it looks pretty neat. A bit of finishing plus a painting and life will be good.
Posted by Notes from Nicki at 6:19 PM 4 comments: