I started weaving my new warp yesterday morning as planned. So far, I have half a bug; half an aristobia beetle from Thailand. The shiny copper metallic thread combined with the rust color in rayon is coming out quite nicely on the green. 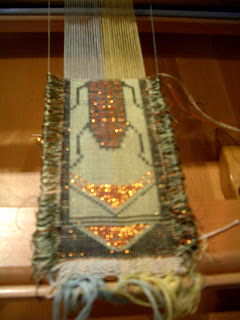 This is the shake down cruise for both the loom and the warp so things are going slowly. This is the first warp I have done on this loom with fine threads. Fine threads is the reason I bought this particular loom - an ashford sixteen harness table loom with a 24 inch weaving width and a hanging beater. I must say that hanging beater is heavenly - easily provides a perfect consistent beat.

I have re-adjusted how the shafts were hung. The loom directions suggested hanging them in such a manner that each one is slightly higher than the previous. That was fairly impossible for me to achieve given the spacings on the texsolvv and the space available on the loom. It would probably work with eight harnesses - not sixteen. And anyway, it was giving me an odd shed which kept catching some threads...so I went back to a more level hanging. It's better.

I also saw a couple of twisted heddles in the back...I figure I will fix those when I take this first piece off the loom or when the thread might break.

In the photo you can easily see the two toned warp at the top where it is waiting to be woven. The impact is quite subtle in the weaving.
Posted by Notes from Nicki at 7:19 AM

The two tone warp was a happy decision, wesn't it? It's subtle, at least on the computer, but adds another of interest without taking away from the glorious beetle. It's really great, CFS!