I wanted to dye some yarn which would go from light to dark and try it out in some shadow knitting to see if I actually like the shadow knitting technique. I really need a scarf that I can wear with blue jeans. No scarf I have woven, knitted or bought has any blue in it. Well...there is one...but it is wool - - woven before I realized I was allergic to wool.

Before our Group Dye Day, I spent a morning 'honing' my dye technique. I described the technique for dyeing a ball of yarn in the middle of a previous blog. I used procion dye since my yarn was a blend of cotton and modal. I followed the technique described in the Yarn to Dye For book by Kathleen Taylor adjusting for the fact that I was using a dye for cellusose fibers and not wool. The basic method is to soak a loose ball of yarn in soda ash and then drop it into the dye. Every five minutes about five yards are pulled out. Obviously, it was messy - quite messy. And my results were not great...I had very little graduation on my first experiment and lots of the dye washed out. Plus, my two different reds turned out a pastel pink...

For Dye Day, I modified my technique a bit. I soaked the dye longer in soda ash and made some extra dye to boost the color after forty minutes. Plus, instead of red I tried a wedgewood blue and a seafoam green. The results were better. I did get some graduation. When pulling the yarn out of the dye, I ran it through my fingers to get all the dye out and laid it carefully in a plastic container. I then, let it sit for a day to cure and dry. Once dry I donned my plastic gloves and skeined the yarn, rinsed out the dye, dried it and balled it all up. This experiment turned out a bit better but I will need to knit it up to see how the graduation really shows up.

I wanted to try knitting a diagonal scarf - the ones where you add a stitch on one side and decrease on the other side. I like how they hang and have never done one that way. I planned to have the shadow stripes go diagonally up the scarf. I've started the knitting a couple of times to get the shadow stripes going in the 'right' direction. I think it's working now. 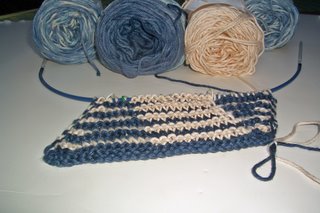 Here's a picture of the yarn and the first few inches of knitting. From this angle, you can see the stripes going diagonally up the scarf - - I am not sure how obvious these stripes will be when worn. I'll post another photo when I get further. Too bad I can't post the actual feel of the piece - - it is soft and smooth yarn which has a great feel and the texture from the ridges make it even better.

You will note that I also had a couple of extra lighter blue & off white balls there. Those are the extra ones I made a few days after Dye Day when a call went out that there was dye left over and would anyone be interested... I figured - why waste the dye! I didn't think I had enough yarn to finish one scarf so I handpainted a skein or two with a variegated pattern in that wedgewood blue. Now I will have more than enough yarn. Using this different pattern on the other half of the scarf should add visual interest. 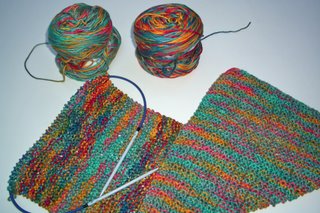 I also handpainted a few other skeins with the left overs...it had that tie-dyed look when I finished painting. Interestingly and not planned, the two skeins go well together. One is darker than the other. I am knitting the two using seed stitch so I can knit while watching TV or listening to folks talk in meetings. I like how it is coming out.

This too may go with blue jeans...
Posted by Notes from Nicki at 5:49 AM