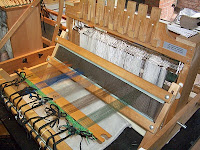 The raining weather has kept me from weaving anything where color might be an issue. It's dark enough in my house when its sunny -imagine what's it like when its raining. But I did find other things to do...

No more whining looms in the back studio. I have gotten two looms warped; my small tapestry loom as well as my eight harness Kothe Varpapuu shown to the left. My sixteen harness workhorse is empty yet happy in knowing its neighbor, the Varpapuu is testing different colored warps for the next beetle series which will be done on the 16 harness.

I've warped five different colors of serger thread to do various sampling with the end result being a stack of bookmark note cards for the Designing Weavers show and sale in November plus a decision as to what color warp to use on my next series.

For the first time, I tied on the sewing thread to an existing warp. Normally, I warp from the front filling the reed and heddles one by one. I thought tie-ing on the warp, which I do on other weaving projects would be faster. So I thought - why not try it?

Having done it...I'm not sure which I prefer. It still seemed to take me a couple of days to get it all done...it was so boring making knot after knot after knot standing in one place. I kept taking breaks to relieve the back and the mind. The warp rolled onto the beam with about the same amount of hassle as the other method but the best part was...no errors to fix since all the warping errors were corrected in the previous weaving.

So in summary - exceptionally boring to tie but in the end a faster road to actually weaving.

Now if only the sun would come out.
Posted by Notes from Nicki at 3:53 PM