Not much blogging recently...probably because I have been involved in finishing. I don't much care for that last 5% of a project and I have a number of projects in that stage.

On a more inspiring note, I began preparing my loom for the piece I am creating for the yardage exhibit at convergence. I want to put on a warp - about 5-6 yards of sewing thread...actually Maxi-lock serger thread made of polyester. I am using a 12 dent reed sleyed 4 threads per dent for a sett of 48 epi. I am going for 900 ends...just a tad over 18 inches.

I remember the last time I put on a long warp with this type of thread. Quite a nightmare due to the threads clinging to each other, twisting around and making knots. If I recall, I spent four or five days last time slowly...inch by inch...moving the thread through the reed and heddles. There was not an inch without at least one or two knots. Fortunately, I had lots of patience. I am planning on a better result this time.

This will be the first time I have warped up the 16 harness table loom with a long warp. It is not the best loom for front to back warping but that's the way it goes. I need the width...it goes out to 24 inches and I definitely need the 16 heddles. My design uses all 16 although it does look like it is woven on a loom with 27 harnesses. 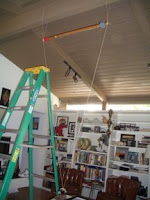 This time warping I am going to use the theory that the less you touch the warp and the more under tension the better the result. I am going to try using a trapeze which I think Charlene discussed perhaps a year or two ago. I need the trapeze set up real high since the warp is 5-6 yards long and I want it to hang under tension. I set up the trapeze in the dining room/family room. It was stung across the weight bearing rafter which required a huge ladder to reach. The loom rested on the dining room table. Do notice how I have taken over this entire two room space. My DH is very understanding. 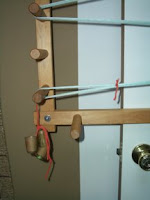 I also took over the den where I hung my warping board on the door with wreath hangers. I also put out the spool rack...since I had three cones of each of the two colors I wanted to use. I am using a mint green and a turquoise and all gradations of those two colors in the warp. I want to subtly show a color shift from the mint to the turquoise as your eye goes across the finished piece. Both these two will blend nicely with the various weft colors I have selected. So each spot in the piece will have a slightly different hue and along with a few metallic colors it should resemble the ocean.

[ Notice the little copper candle holders - I bought these for five bucks at a recent garage sale. I attached them to the end of the warp as a weight to maintain tension. I decided these would be easier than water jugs. ]